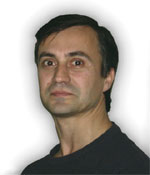 Marcel Delord is a designer extraordinaire, producing stunning artwork and illustrations as part of his work on product design.

His talents go beyond that though, as he has recently completed a full-length movie, entirely computer generated. A solo project from start to finish, it will soon be distributed on DVD, proving you don’t need hundreds of people to complete a full-length film! 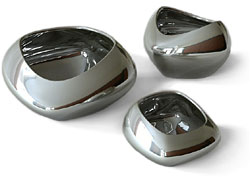 After technical studies, Marcel Delord chose plastic art and sculpture as his medium, and creation of physical objects has remained his passion. In that respect, his beautiful artworks are for him just a step in the process which leads from conceiving an initial idea through to an actual solid object that you can hold in your hands.

He has been a designer for 24 years, working for many famous design agencies. He is fond of computer graphics and synthesised images, and in the early 1980s he even developed his own 3d software – back then, such software did not exist, and making his own software was the only way to realise his first creations! 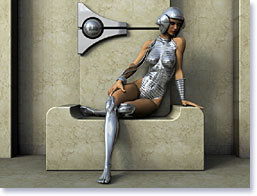 Then he contributed to the making of one of the first pieces of software to use NURBS and ray-tracing, which was named « Volumm4d ».

These days, Marcel Delord uses trueSpace for his work. “From version 3, this software has impressed me by its intuitive approach and its interface which is more appropriate for artists than the majority of competitors which are often conceived for engineers. Thanks to trueSpace, my imagination is

not slowed down by technique!”

Today, Marcel devotes himself to product design, as well as having just finished his first big project in 3D animation. He hopes that in 10 years, 3D creation will use an artificial intelligence interface that will display automatically the functions an individual user uses most often, tailoring itself to that users’s preferred way of working.

« The word ‘configuration’ would become a souvenir, » he said, « when this ability is combined with vocal command and retina identification! » 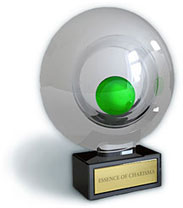 The « Essence of Charisma » Awards honour a renowned persona who exemplifies a spontaneous and irresistible energy. The trophy is a clear crystal globe, created for The Fragrance Foundation by Marcel Delord of Dinand Design and manufactured by Pochet of America directly from files from trueSpace.

“It is one of the many projects I have succeeded in thanks in part to trueSpace, because of the quality of its render engine. Before using computers, I made prototypes out of physical materials. It is still necessary to pass through this stage, but now it can be done in 3D on the computer without the need to make an actual physical mock-up.”

The Fragance Foundation awards are considered the « Oscars » of the fragrance industry, and this striking and beautiful trophy found a fittingly prestigious home, 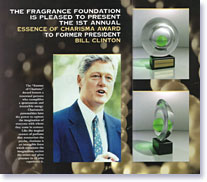 as it was awarded to former President, Bill Clinton.

Now after 24 years of creating product designs, Marcel Delord is now looking more and more towards animation. “The power of computers these days lets me consider film making as a means of presenting designs, while still remaining autonomous as I do not have to be dependent on someone else to make the movie.”