Many 3D artists have done their first 3D steps in the versatile and accessible trueSpace, before starting to learn more specialized software. It is still appreciated for its fully icon-driven interface, with almost no equivalent in the 3d softwares industry.

See below the major versions of its history. 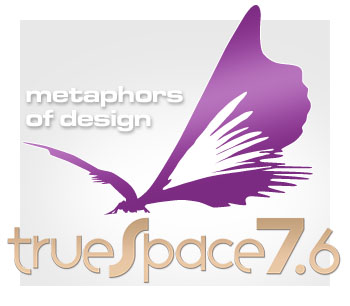 The most complete version, tS 7.6 provides both the full tS6.6 core under the « Modeler » tab, and the Rosetta core under the « Workspace » tab. It is known as the most stable version for users of the Modeler side.
It has been followed by tS7.61 and tS7.61 standalone. The Workspace side of these versions is more polished and should be prefered if you make good use of the Workspace tools. In the 7.61 Standalone version, the tS6.6 core is completely removed to get a light and faster program for applications that don’t require tS6.6 toolset.

tS7.0 has been a confusing release. Users were waiting for better animation tools, the implementation of fur and more file format support… Instead Caligari came with a broken tS6.6 (some tools were removed), embeded into a new interface providing a real-time engine. This « work-in-progress » led some third-party developers such as PrimitiveItch to leave trueSpace development.

But thanks to its new architecture, many new tools got implemented and the new real-time view, called « Player » at first, has been renamed as « Workspace ». Many new efficient tools came out in tS7.5, as well as V-Ray support. Then tS7.6 came out and was given for free ; and despite the end of the official development, Caligari finally provided the community with an incredible opened platform allowing the most vertatile projects.

Almost all the new features of tS for Illustrator have been added to tS7.5 but some file format were removed later (IGS, SAT, SAB). These file formats support became available to tS6 version through extension packs.

GameSpace was the first affordable 3D creation tool for a generation of game makers. It has all the tools to create, texture and animate characters, to build levels, spaceships, weapons and vehicles.

With its different export formats to many games, it became in the 95′ the choice of a generation of hobbyists game makers. 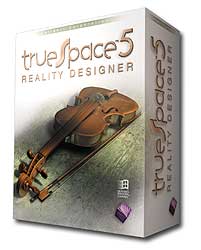 trueSpace 5 came with a new Material Editor, and many new tools such as NURBs.

Many bugs have blotted theses versions though, contributing to trueSpace’s first signs of disgrace. Some memory bugs and interface issues never got fixed until trueSpace7.5 ! During the tS 6 & 5 period, trueSpace somehow rested on its laurels, and the growing community was relying on thrid-party plugins. The economical model of trueSpace, providing professional tools for the masses kept the head above water thanks to the release of plugins packs dedicated to rendering, animation and special effects, and paid courses given by pros users.

« Born to accelerate », trueSpace4 was taking advatage of the hardware acceleration via DirectX and OpenGL. Many users say tS4.3 was probably the most robust and reliable version ever. It was used by professionals of the movie and graphic businesses and was seen as a « big boy » by many actors of the 3D sofware industry. This statement even led Cebas, the known Max’s extension developper, to release a version of its famous plugin, Pyrocluster.
At this time, three books have been published :

jewelSpace was a trueSpace version customized for the jewelry design market. It came with a set of specific material and shapes libraries. Caligari was providing jewel designers with a 3-days classroom training.

This one was probably a niche market and no information have been reported on the forums about it.

trueSpace 3 was a very complete package : VRML, inverse kinematics, physics, metaballs, 3D paint and collision detection… many of these tools have crossed the years and are still present in tS7.6. The free release of tS3.2 was a huge success among 3D hobbyists and it highly contributed to trueSpace popularity. Some people are still using it because of its very ease of use. It has been translated into several languages.

While the first trueSpace version was almost a confidential release, TrueSpace 2 received a well deserved critical acclaim and industry awards. Its full screen 3D view with an intuitive interface, fully icon-driven, was making 3D creation accessible to everyone that could afford Intel’s 1995’s Pentiums. One could say that the trueSpace public history starts here.