The beta cell project is an exciting work-in-progress that will help bring the inner workings of a cell to life for students and researchers alike. We spoke to Chris Barker and below you can hear about the project, what it is for, and how it was created, all in his own words:

« I was trained as a biochemist but my job title is now Associate Professor in Cell Biology in Stockholm, Sweden. My hobby is art: traditional watercolours and now 3D. »

About the cell, and the project :

« First, it would be a good idea to introduce the pancreatic beta cell itself! This cell acts as a glucose-sensor releasing insulin in response to increased levels of blood glucose following a meal. The destruction or malfunction of this cell leads to Diabetes.

The original plan was to be able to demostrate how a beta cell works ‘live’, so this project was always intended to end up as an interactive real-time environment. My boss already had a 3D movie of the cell made in 3DS Max, but on finishing it he immediately reliased that this was rather limited – it was not interactive, and relatively costly to keep ‘upgrading’ as you needed to re-render the animation over and over again each time the cell was changed or improved.

A few frames from an animation does not compare to exploring
inside the cell in real-time 3D!

The audience was primarily intended to be biomedical scientists, but of course the interactive scene can and will be used to help the general public understand how this cell works and its involvement with diabetes, a disease which is reaching epidemic proportions worldwide.

As a result of working on the real-time version, I then created my own cell from scratch for the purposes of illustrating a review chapter of a book I was writing together with my boss. Up until then, I have largely used 2D (Coreldraw) for my scientific illustrations, but I found the 3D to be a much better approach. Due to time restrictions this time around, the end result was a combination of 3D renders, with lettering and other labelling done after rendering, back in Coreldraw. I now vow to continue pushing the 3D envelope in the future though, and not the 2D one! »

The vital role of collaboration : 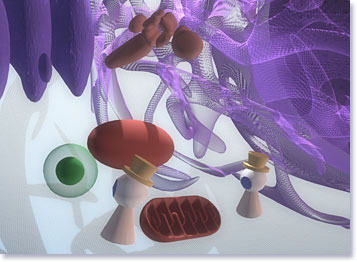 « trueSpace had always been a hobby for me, and I knew I neither had the time or the 3D expertise to tackle this kind of project on my own. I could see the real potential in it though!

So the big advantage of how the collaboration worked in this case was that I am trueSpace and 3D literate, so I could interface on this level with 3D artist Matthew Collins, who did most of the modelling and texturing being more of a 3D expert than I was.

Matthew in turn was not a biomedical scientist, so he got a lecture course in cell biology which perhaps he hadn’t bargained on – but at least it was free!

Two people exploring inside the cell (shadows are enabled in this
version of the scene, to give a great sense of solidity)

We communicated by email to start with, but the real boost came when we (Matt, Roman and myself) were able to discuss the project ‘live’ right inside the model itself. It was amazing how much this very direct interaction speeded up communication and helped Matt with his scientific learning curve! And of course his understanding about how to model it.

Without those collaborative possibilities that only trueSpace can offer, it would have been impossible to have a biomedical expert and a 3D expert work so closely and quickly without them physically being in the same room. »

3D in the biomedical workplace

« Currently we use 3D primarily for illustration, for education to specialists and non-specialists. Of course 3D protein structure and X-ray crystallography use propriety 3D-based software. So far, data from these proprietary packages has not had the ability to be exported to conventional 3D packages.

However, when I was building my models of two of the membrane channels, I used the actual physical structures (worked out by X-ray crystalography) as a template for building the models. It would be great if in the future trueSpace could take the raw data from such protein structure studies and import it in the same way as it can now import some CAD formats! Then trueSpace could become part of the ‘pipeline’ moving from specialist equipment and software to useable realtime environments. »

How real-time 3D collaboration will change things in future :

« I think this has enormous potential actually, both for learning how to use a 3D program, but then to use it as an interactive tool to teach, in my case about cell biology.

From an academic/educational point of view, it could become a very valuable asset. Cell biology is very visual anyway and of course is all about a 3D space. Images and diagrams, even videos, just can’t do it justice. Also, in my brief experience the more people see it in action, the more they would like to be able to use this kind of visualisation in their own projects. » 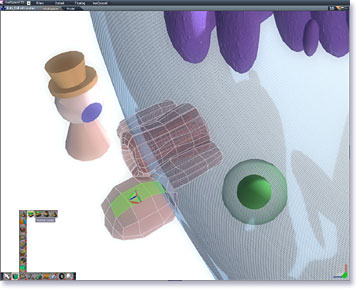 « At the moment to have this up and running will draw excited comments from our colleagues, so it would be nice to run with it first! However, I think the beta cell itself incorporates many features that are present in many different types of cell, so I would imagine that a more generalised adaptation of this specific model could be made publically availble through truePlace technology. »

One person models while another looks on, both using real-time
voice to communicate

« trueSpace has a head start on any general 3D package, due to the real-time environment. In short, I cannot see how we would have done this using some of the big names as they stand at the moment. trueSpace really has opened up a new niche.

When I first showed it to my research group, the first half of the talk consisted of nothing but illustrations using powerpoint. Then I opened up truePlace with the same scene we had looked at a moment before in 2D. The was an immediate and gratifying intact of breath when I moved into the scene in real time and I became the tour guide as various colleagues shouted out ‘Let’s see the nucleus then!’ or ‘Can you go here?’ etc! It immediately invited active audience participation, which woke them up and made the whole experience more interesting, fun and compelling – and when people have fun, they are better at paying attention! »

« No further future plans at the moment – the beta cell will keep me occupied for quite sometime! »