A.3.P. is a company who produce high quality 3D perspectives, internal and external visuals for both Architects and property developers, to assist them with proposed developments, architectural concepts, and planning control development consent.

The company name is an abbreviation of Architectural 3D Perspectives. Very much a family business, it was formed by husband and wife team John and Penny. John creates the 3D models of the buildings or objects from the architects’ scaled plans or drawings, and then texture maps them with the required finishes ie: brickwork,timber cladding, etc. 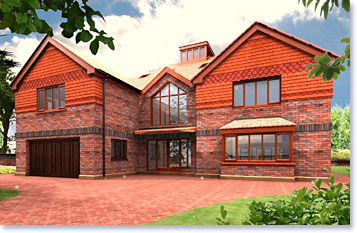 ohn was very good at art while at school and was given a place at a college to study, but he had to decline that chance in order to work in his family’s joinery company. While there though he learned how to scale architects plans and create detailed technical drawings of his own.

John first used trueSpace when version 2 was released free on a magazine. He loved the user interface, and after three months he entered a competition run by Computer Arts magazine to win trueSpace 4 and an Iilyama monitor. To his suprise he won first prize out of over 50 applicants, which got him the software and monitor and also had his art work shown in Computer Arts.
Building exterior image, will be used for marketing and promotion prior to house being built

A local property developer saw the artwork and asked John if he could produce 3D perspectives of his proposed buildings, and A.3.P. was born! The company was run part-time until September 2006, when John resigned from the family firm and registered A.3.P. as a company, all on the same day.

Penny’s role at A.3.P. is interior designs and room layouts, and she also photographs relevant buildings for brickwork textures, and backgrounds for photo montages. She also deals with emails and client phone calls.

You can see many examples of their work on this page. Of course, every render is destined to become a very real building or room. The bathroom above was produced to show a client the look of their bathroom prior to the tiling and bath being fitted, and in that image HDRI was used for the lighting and reflections, with the end result being rendered in V-Ray.

The staircase on the left is another example – it was was modeled to scale in trueSpace then later made by a joinery company to those specific sizes.

While John and Penny have used and own other 3D software, after purchasing trueSpace7.5 and V-Ray they have not used them once. The user interface is one of the many reasons they like to use trueSpace, « It’s so easy to control your entire scene through icons compared to drop menu systems » was their quote. They also find the DirectX real-time rendering display to be a great tool for showing clients virtual walkthroughs of their building interiors. 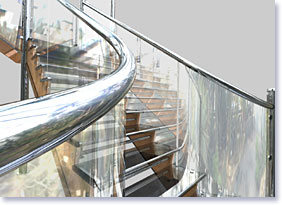 Rendered in V-Ray, this chrome and glass staircase will be manufactured in Nottingham in the U.K.