A Tale of Four Testers

Many people wonder what it is like « behind the scenes » in developing software like trueSpace7.5. During the course of development, some of that has been shared from the point of view of Caligari, through the Captain’s Blog, but now we are switching perspectives and letting you hear from four of our beta testers about what it was like helping test and shape the next version of trueSpace!

Tom: Tell us a little about yourself.

Stephen: I started using computers in 1983. Since 1988 I have worked in the digital design and output field for the display graphics, identity graphics & photographic industries. 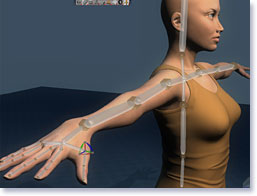 I purchased trueSpace 1.0 when it was released . I knew of it’s existence as an Amiga user but didn’t purchase it until it was released for MS Windows. I started using trueSpace for Trade Show Displays on a part time basis with my personal business in 1992.

Five years ago I left my day job and went into my business full time. I do contract work for various clients. My main jobs include trade show displays, identity creation, and concept visualization.

Originally, I chose trueSpace as my main 3D application because of the unique interface. I relate to a graphic environment and can relate to the visual, so I found trueSpace very easy to learn and use.

Stephen: Well, I’d have to say both. It’s great to receive a new beta, I get the same rush of excitement as receiving a release version of the software, but it happens more often! I’ve always enjoyed exploring the features of software, testing its complexities and limits. 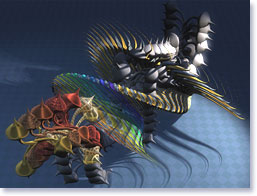 Another thing that is fun & rewarding is the direct communication with the Caligari Developers. Having a question answered, concerns addressed or suggestion acknowledged is great!

The hard work part for me is sometimes a beta release happens when I’m swamped with my own work. Since I have my own business there’s no one to crack the whip (except my clients of course). So there have been times when I’ve had to choose between finishing a job, or checking out a new beta (I usually chose the latter!). But luckily, being an insomniac helps in that department.

Tom: What do you think people will like most about the software once they get it for themselves?

Sorry, but I couldn’t think of just one thing and I’m sure even then that there are some I’ve missed! My personal favorites are the modeling tools, U/V editor, plants/trees and displacement mapping.

Tom: What do you think of the new character posing and animation tools in trueSpace7.5? 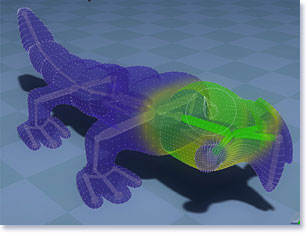 Stephen: In earlier versions of trueSpace I had tried character posing and animation to learn the workflow and to be honest the results were less than satisfying. When I purchased an upgrade offered inclusion of Motion Studio I found it easier to use than the native bones, but without any real purpose in mind I gave up fairly quickly.

Working with the current betas I’ve found it very easy to do the initial setup that had stopped me in previous attempts. The process is very intuitive, and I can now rig a simple character in 10 to 15 minutes!

Tom: What are your future plans for your 3D work? 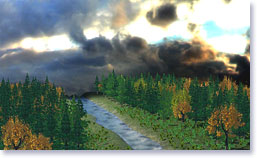 Stephen: I have already incorporated the real-time display of trueSpace & truePlay into my work. Now my clients can view a 3D scene instead of just a static image.

This gives them a better understanding of complex concepts & structures. Also the use of the shared space is very interesting to me, and has many possiblities to explore.

I plan to expand on this with motion and interaction that the Link Editor allows me to access and intend to learn scripting as well. Also from a recreation or hobby perspective, I have many ideas that I’m working on.

Tom: Was beta testing more fun or hard work for you? 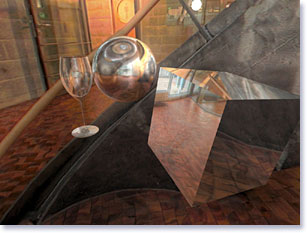 David: It can actually be both, fun when new features pop up that are awesome leading to lots of experimentation and sometimes the imagination just goes wild. Hard work also catching any problems from the revisions, sometimes things just don’t go right.

Tom: What did you enjoy most about being on the beta team?

David: There are too many to list! First and foremost are the outstanding people there, from Roman and all the Caligari staff including the developers, to all the other Beta Testers. Second is the hands-on working with potential future software and seeing trueSpace being developed, which is very exciting to say the least.

Tom: Any favorite things to test?

David: On this round it has to be shaders, DX9 shaders to be exact. I really believe the trueSpace7 series has a very accessible and powerful DX shader system, which I am finding easy to work with.

The real-time renderer gives you instant feedback which allows rapid progression of a scene. I also found I can render to large resolutions including HDRI file output which I can edit externally and get spectacular results.

Tom: What have you created using the beta software that you’d say was your favorite?

David: LOL, the DX glass shader that I created – I am currently working on a more advanced DX reflection shader.

Tom: Anything surprising about how the beta testing went? 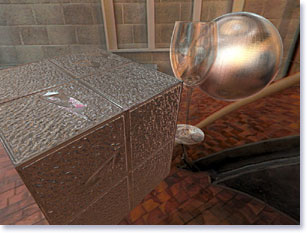 David: The utterly rapid progression from one beta to the next, bug fixes and advancements – all I can say is frantic pace!

Tom: What is your favorite improvement from this round of development?

David: Animation abilities that keep on getting more and more powerful, OUTSTANDING!

Tom: When the users get the software, what do you think will be their favorite?

David: It will have to be in the character animation aspects with the very accessible but powerful new animation tools.

Tom: If we asked you to beta test again, would you say yes?

David: Ahmmm, sign me up for the next ten years if you would 🙂

Tom: Was beta testing fun for you, or hard work? 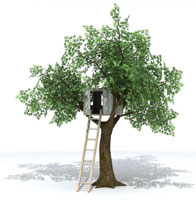 Heidi: Oh, definitely fun! Getting to try out all the new features is really great.

Tom: What was the most enjoyable part of being on the the beta team?

Heidi: Watching the product evolve as feedback comes in regarding workflow and ease of use. Having a beta-testing forum is really nice. There’s open discussion between beta testers and with Roman and the programmers on features and preferences. The result is that there’s no question about the status of the beta or what issues are at the forefront.

Tom: What was your favorite thing to test? 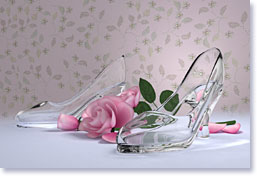 Heidi: I’d been playing a lot with V-Ray and trying different renders. But I really like the new point edit tools. If I had to pick a favorite, it would be the new soft brush. I really got hooked on it. It’s a very organic and intuitive way to model.

Tom: What is your favorite thing that you’ve made using the beta software?

Tom: What was the biggest surprise for you in beta testing?

Heidi: I was really surprised at how quickly the programmers respond when bugs or concerns are posted. That and there’s a new build to test every week. It’s a very fluid process and much more responsive than I expected it would be.

Tom: What was your favorite improvement during the beta?

Tom: What do you think the users will like best once trueSpace7.5 is released? 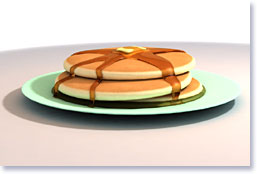 Heidi: I think they’re going to be really surprised at how user-friendly trueSpace7.5 is. It’s got more features and a lot of improvements over the original 7.1, but it’s a lot ‘friendlier’ to work with.

I know my reaction when I first fired up trueSpace7.5 was that it had a completely different feel to it than 7.1 – it was FUN! Feature-wise, I think people are going to go for the soft brush and the upgraded animation tools as their favorites.

I also think they’re going to find the tighter integration and render controls for V-Ray really great to work with.

Tom: What was your least favorite beta testing moment?

Heidi: When I found a little bug that not only closed the application, but also shut down my computer. That was scary. The programmers’ response was that I’d had a ‘good’ crash (hehehe).

Tom: Would you beta test for Caligari in the future? 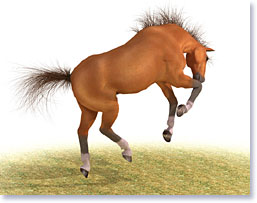 Heidi: Absolutely. Everyone involved has been friendly and supportive of one another. I’ve really learned a lot from being able to participate and see how the software evolves. I really
appreciate Roman inviting me to join in 🙂 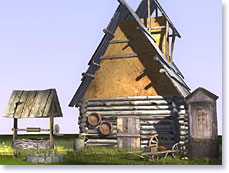 Marcel: Definitely fun! To test out new features, and to see how bugs are solved, makes working a pleasure.

Tom: What has been most enjoyable about being part of the beta team?

Marcel: The friendly working atmosphere with other testers and with the developers – receiving help with problems, the understanding shown when we make feature requests , etc.

Tom: What has been your favorite thing to test?

Marcel: First it was rendering and the V-Ray functions, but with the time the new real-time DirectX possibilities and the Link Editor has become a fantastic thing. The new real-time view is much more accurate and the textures look sharp and clean, there are no distortions anymore like in the earlier versions of trueSpace.

This means you can create real-time worlds where you can walk in and watch, and build the world just as if you were living in it. Building – modeling and placing objects – with real-time shadows is also a great help.

The Link Editor is another fantastic thing. The possibilities are unlimited, from modifying widgets, to building shaders, just by placing and connecting bricks.

Tom: What is your favorite thing that you’ve made using the beta software?

Marcel: Some of my real-time spaces like the Hinterhof (backyard) or the House. I have never been able to build such scenes in any other software, especially not in a modeling package with such a high output quality like trueSpace7.5 has. The easy flow from modeling to texturing to lighting, with the possibility to show customers scenes directly in real-time is a real benefit. 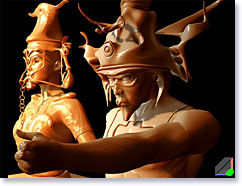 Tom: What was the biggest surprise for you in beta testing?

Marcel: Working with the Link Editor Shader system. It was amazing to find that you can create things of your own, or extend and build upon items made by others (or just work with them if you don’t want to build upon them), and to see it all work in the end.

It was a great emotional moment, at least for someone who has no feel for scripting and coding 😀

Tom: What is your favorite improvement that you’ve seen during the beta testing?

Marcel: The ‘drag & drop’ possibilities, such as the ability to move pictures and data from Windows explorer directly into the program. The enhanced library system is also great.

Tom: And what do you think will be the users’ favorite improvement once they get the software for themselves?

Marcel: Oh I think there is something for everyone. Maybe the new bone system. As far as I have tested it, it is rock solid and there is no comparison with the previous trueSpace6.6 bone system any more.

Tom: Would you beta test for Caligari again?

The answer is most definitely ‘Yes’, at any time. The developers did a great job and from my point of view were always open to any suggestion.